That’s how the saying goes: ‘Hungry enough to eat a horse.’

But have you eaten a horse? Or even just some horse?

I have. Along with 9 friends last weekend we ate horse steaks grilled and seasoned with salt and herbs.

Read the full story on Foodists: Hungry Enough to Eat a Horse

So let’s get this out of the way right away: I have no f-sharp love for the Toyota Pruis.

I hate the car and I hate what it stands for.

Nothing about the insides feels familiar in the traditional sense, unless you are a prior Prius person. The new interior is swathed in low rent plastics which emit nauseating vapors, leather seats (if so equipped) that made me long for Naugahyde and gauges which were not only situated well out of sightlines, but rendered in a primitive digital manner which were indecipherable even up close. Of course I could always tell how slowly I was driving from the desperate looks on the faces of the drivers eager to get past me.

The 2010 Prius’ ergonomics were designed for only two kinds of creatures: those who like to sit five inches back from the front windshield and orangutans. Everyone else will find that the steering wheel, adjustable now for tilt and reach, is still too far away for a proper seat position. There is a nice new electric lumbar support in the seats, which are otherwise unsupportive and ill-shaped.

The driving experience was engineered by faeries. There is an Unbelievable Lightness of Steering, flagrant disregard for handling and a general sense that you are not in a car at all but some anti-gravity device which yaws and rolls without regard for normal physics. I would rather visit my dentist than drive the Prius again—at least he gives me laughing gas.

And what the car stands for? 3 reasons:

And that’s all after I had a day to consider my reaction to the new Prius.

A little cold water data to throw on the party of the next web cock trumpeting the revolutionary phenomena of Twitter.

Grandiose claims have accompanied the spread of the Internet like wetness accompanies water.

So when I read an article full of triumphalism like Blogs Falling in an Empty Forest about the failure rate of blogs, I know I’m reading a writer who’s missing the story.

As an example, a year ago you could have read that Consumers were facing shrinking lines of credit from banks.

Washington Mutual, one of the nation’s biggest issuers of second mortgages, said in May that it had reduced or suspended about $6 billion of available credit under existing home equity lines. Countrywide, Bank of America and JPMorgan Chase have made similar moves.

You could also learn that tomatoes contaminated with e-coli bacteria were sickening people in 16 states. But nothing will change and more shit (literally) will get shipped in food.

As a result, people fear dying from terrorist attacks instead of car crashes. We watch reality TV while our natural world degrades.

So while technology has made many things more accessible to us, human nature remains stubbornly resistant to lasting changes. And the changes that get incorporated into our lives seem like they’ve been there for a long time.

The truth remains that anyone can start a blog but few persist. The truth also remains that many people now read and keep blogs and don’t have as much use for the NYTimes.

And this will change too.

All that cheap credit led too many rich folk to overextend themselves.

Now the credit is being crunched. Payments get missed. Banks need to repossess the big-ticket items: jets, helicopters, boats. That’s when they call Nick Popovich.

For the past three decades, Popovich has been one of a secret tribe of big game hunters who specialize in stealing jets from the jungle hideouts of corrupt landowners in Colombia, Mexico and Brazil and swiping go-fast boats from Wall Street titans in Miami and East Hampton. Super repos have been known to hire swat teams, hijack supertankers and fly off with eastern bloc military helicopters. For a cut of the overall value, they’ll repossess anything. 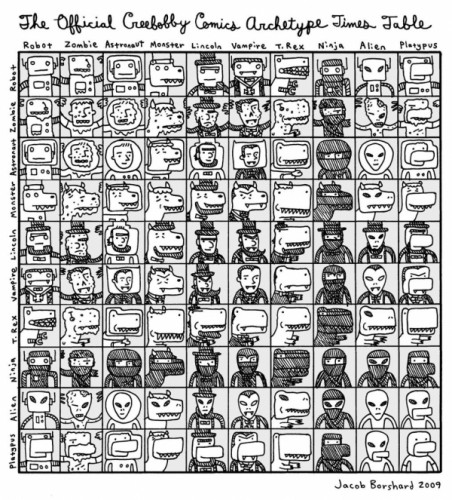 Found via Make My Mood.

Found by Bud Caddell from XLMC.

Ever since Mike Cvik came into the league they trend has been towards bigger linesmen and more athletic referees.

The length of passes a team makes are an accurate precusor to the outcome of the game. Detroit makes many short, crisp passes. Pittsburg makes fewer, longer passes. Detroit leads the series 2-0.

I have no data for this theory but I’ll noodle about to see if I can find some.

This I do know: short passes have a very high percentage for completion. And the puck always moves faster than the players. So a team using many short passes keeps the puck in possession moves up the ice as a unit.

Greater speed means more opportunities for speed differential with the opposition — the main way one-on-one moves are made. It also means many of the players on a team are moving at roughly the same speed, so they move together through zones and can keep passing.

So why doesn’t everyone use short passes?

But when it happens it’s a thing of beauty. Watch the Red Wings and you’ll see it in action.